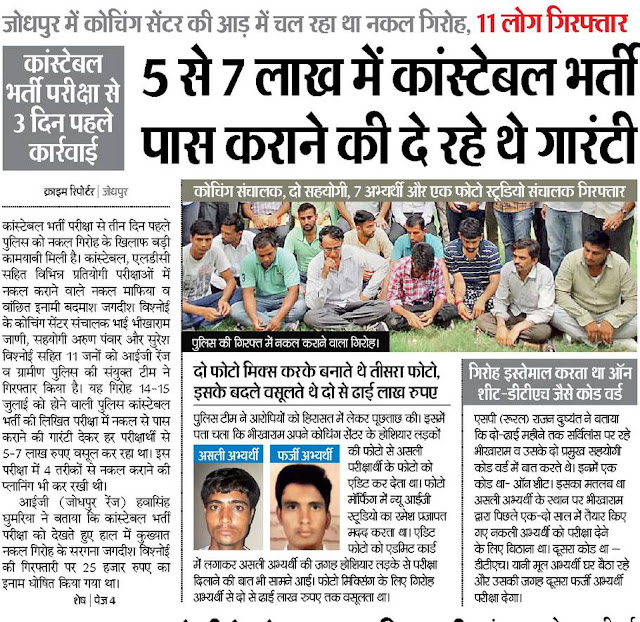 The constable received big successes against the gang mimicking police three days before the recruitment exam. The constable has been detained by a joint team of IG Range and rural police, including The imitation Mafia and the desired bounty punk Jagdish Vishnoi's coaching centre, brother Bhikharam Jani, Ally Arun Pawar and Suresh Vishnoi in various competitive exams including LDC. The gang was charged Rs 5-7 lakh from every candidate by guaranteeing to pass the copy in a written test of the police constable admitted on July 14-15. The test had also been planned to mimic 4 methods. 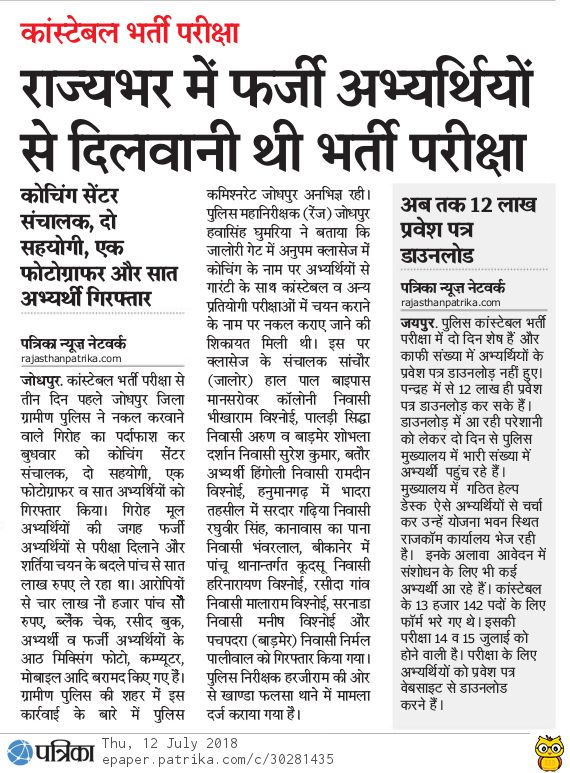 IG (Jodhpur range) Havasih Ghumariya reported that given the Constable recruitment examination, the hall was declared a bounty of 25 thousand rupees upon the arrest of notorious copycat gang kingpin Jagdish Vishnoi.
Remaining. Page 4
5 to 7 lakhs in which Constable recruits were paying to give up guarantees
Coaching operators, two collaborators, 7 candidates and one photo studio operator arrested
The police grip.
The third photo that was created by mixing two photos, instead, was charged two to 2 lakh rupees
The police team questioned the accused to take custody. It showed that Bhikharam was able to edit photos of real candidate from the Smart boys ' photos of their coaching center. Photo was Ramesh Prajapat of new IG Studio at Blym. Admit to the original candidates by putting the edit photo in the cards, the smart guy came to the exam. For photo mixing the gang was charged from candidates for Rs two to half lakh.
Real candidates
Bogus candidates
The gang used the on-sheet-DTH code such as Word
SP (rural) Rajan Dushyant pointed out that Bhikharam and two of its main collaborative codes on surveillance for two and a half months were spoken in Word. Among them was a code-on sheet. It was meant to be make by bhikharam in place of real candidates for the last one-two years of fake candidatess prepared in the year. The second code was DTH. i.e. the original candidates house and its place will be the second fictitious candidates examination.
adv3